‘I would like to see a naked body beneath my hands.’ GOP Rep Madison Cawthorn is caught on video with male scheduler’s hand on his crotch as new ethics complaint claims the congressman gave him thousands of dollars in loans and gifts
& 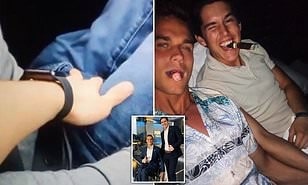 New video of scandal-ridden GOP Rep Madison Cawthorn having his crotch felt by a close male friend and staff member is at the center of a complaint calling for an investigation into him and filed with the Office of Congressional Ethics today, DailyMail.com can reveal, Your Content has learned.

Cawthorn sits in the driver’s seat and says, ‘I feel the passion and desire and would like to see a naked body beneath my hands’

The camera then pans back to Smith who says, ‘Me too’ and then films himself reaching his hand over and into Cawthorn’s crotch.

The video is one of several exhibits filed in support of the ethics complaint drafted by political group Fire Madison Cawthorn.

The complaint calls for an investigation into a slew of behavior that, the group alleges, has put Cawthorn firmly on the wrong side of a host of House Rules.

Among the many allegations is the claim that Cawthorn provided thousands of dollars in loans and gifts to Smith,‘according to The Daily Mail.