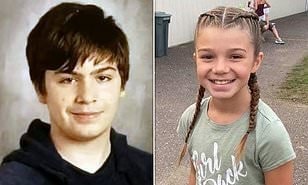 Murdered 10-year-old Lily Peters died from blunt force trauma and was strangled, her autopsy showed, Your Content has learned.

Murdered Lily Peters’ autopsy reveals she was strangled and ‘suffered blunt force trauma’ before she died.

Police arrested Carson Peters-Berger, 14, in connection with the murder of 10-year-old Lily.

Her body was found in woodland close to a walking trail in Chippewa Falls, northeast of Eau Claire, Wisconsin on Monday morning.

The fourth-grader had gone missing on Sunday night after being at her aunt’s house.

Peters-Berger is now facing a possible life sentence after being charged with three counts over Lily’s death and held on a $1million cash bond.

In court, prosecutors said he planned to ‘rape and kill the victim from the get-go when he left the house with the victim to go down the trail,‘according to INDEPENDENT.