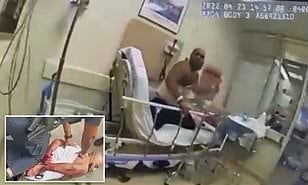 Newly released bodycam video shows the shocking moment a man attacked a nurse and lunged at cops with a pair of scissors while he was handcuffed to a hospital bed after being arrested for stabbing a woman during a domestic dispute in the Bronx, Your Content has learned.

Luis Medina, 30, was taken into custody Saturday for allegedly stabbing a 41-year-old woman during a domestic dispute in The Bronx.

Medina was taken to a Bronx hospital to be treated for minor injuries and handcuffed to a hospital bed.

He was caught on bodycam video taking a pair of scissors and hitting a nurse.

The nurse was not seriously inured and fled the room.

Medina then attempted to lunge at a cop while handcuffed to the bed.

He faces multiple assault charges and criminal possession of a weapon,‘according to The New York Post.