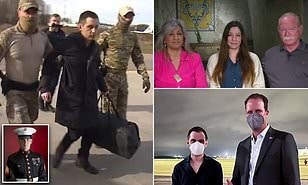 Trevor Reed has been hospitalized but is in ‘high spirits’ after his return to Texas on Thursday after being freed in a prisoner swap with Russia, Your Content has learned.

Trevor Reed has been hospitalized after his return to the United States on Thursday following his release from Russian prison Wednesday.

Reed’s condition is unknown, but his family told Good Morning America on Friday that his spirits were high and that he was ‘flirting with nurses’

Reed appeared emaciated and weak during Wednesday’s prisoner exchange. He had been hunger-striking his recent move to solitary confinement in prison.

The former Marine had been imprisoned in Russia since 2019 after he was accused of assaulting a police officer. He has always denied the charges,‘according to CBS19.