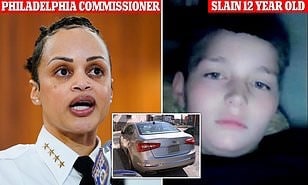 A Philadelphia cop has been charged with murder for shooting dead an unarmed 12-year-old boy after a chase last month that began when the boy fired his own gun into the officer’s unmarked car, Your Content has learned.

Edsaul Mendoza has been charged with the murder of 12-year-old Thomas TJ Siderio.

Mendoza shot Siderio in the back on March 1 while chasing him in Philadelphia.

He and other cops were working in plain clothes when they approached the boy in their car.

Thomas was armed and shot into the officers unmarked vehicle before fleeing.

Mendoza chased him, firing his gun a total of three times.

After the second shot, Siderio dropped his weapon and either fell or dropped to the ground.

He was in a push-up position when Mendoza fired his gun for a third time.

Philadelphia DA Larry Krasner says there is video of the incident that was shown to a grand jury and proves that Mendoza knew the boy wasn’t armed,‘according to FOX34.