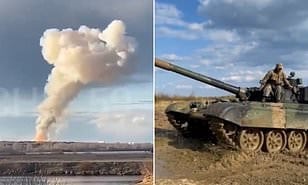 An explosion has struck an arms factory deep inside Russia, a senior Ukrainian official said – just the latest in a series of fires and blasts at military sites amid suspicion they are being orchestrated from Kyiv, Your Content has learned.

Smoke seen billowing into the skies over city of Perm, deep inside Russia today.

It is just the latest fire at Russian military site, thought to be orchestrated by Kyiv.

Came as Polish tanks began arriving on the frontlines, while British intelligence said Putin’s army has now been reduced by a quarter,‘according to The Daily Mail.