NYPD veteran, 56, is convicted of assaulting an officer in the Capitol riot: Claimed he swung metal flagpole and shoved bike rack barrier into ‘a rogue cop’ to protect himself after being punched in the face
N 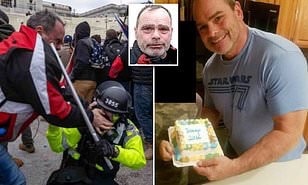 A federal jury on Monday convicted a New York Police Department veteran of assaulting an officer during the U.S. Capitol riot, rejecting his claim that he was defending himself when he tackled the officer and grabbed his gas mask, Your Content has learned.

Thomas Webster, a 20-year NYPD veteran, was the first Capitol riot defendant to be tried on an assault charge and the first to present a jury with self-defense.

Other rioters charged with assaulting, resisting or impeding officers have either entered plea agreements with the prosecution or pleaded guilty.

Webster, who was wearing a face mask in court, showed no obvious reaction to the verdict finding him guilty of all six counts against him.

The former NYPD police officer said he was trying to protect himself from a ‘rogue cop’ who punched him in the face.

He also accused the Metropolitan PD officer of instigating the confrontation,‘according to The Washington Post.