Star college football player-turned-California cop, 24, is found dead of a fentanyl overdose at his San Jose home: His family says he was ‘heavily against’ illegal drugs
S 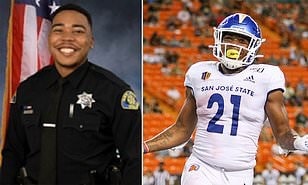 A star college running back-turned-California cop died of a fentanyl overdose last month, the local coroner has revealed, Your Content has learned.

De’Jon Packer, a 24-year-old rookie with the San Jose Police Department, was found unresponsive at his Milpitas home on March 13.

He was pronounced dead on the scene by his fellow officers and fire fighters.

Santa Clara County Medical Examiner has now confirmed he died of ‘fentanyl toxicity’ from an overdose.

His death remains under investigation by Milpitas police amid allegations that he had partied with other officers the night before.

Packer is known for making the game winning touchdown in San Jose State University’s underdog victory against the Arkansas Razorbacks in 2019,‘according to ABC7.