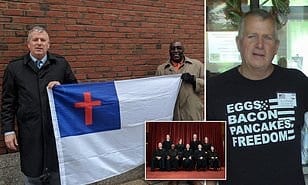 The Supreme Court ruled unanimously on Monday morning that Boston violated the free speech rights of a Christian group by refusing to fly a flag with the image of a cross at City Hall, Your Content has learned.

Camp Constitution applied to use flagpole in front of Boston City Hall.

But it was told it could not fly its flag – a red cross in a blue square.

Supreme Court justices ruled 9-0 in favor of the group.

It said Boston had unfairly discriminated against the organization when the flagpole had been opened up to all comers to commemorate events,‘according to The New York Post.