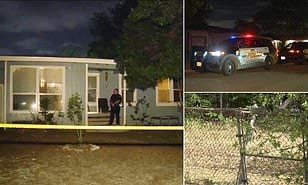 A Texas mother shot and killed a man who broke into her home while her three children were inside, Your Content has learned.

A Texas mother shot and killed a man who broke into her home while her three children were inside at around 10 p.m. Thursday.

Police say the woman who has not been identified heard the man break in.

He allegedly entered the home from the rear through the laundry room, which is apparently adjacent to a public park.

Once inside, police say, the woman shot the man twice in the chest.

The alleged intruder – later identified as Roman Rodriguez, 41 – died of his wounds en route to a local hospital.

The homeowner is not facing charges under the state’s castle doctrine, which allows for the use of force against anyone trying to break into your property,‘according to INDEPENDENT.