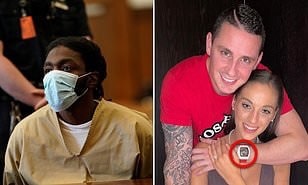 A career criminal, accused of shooting a tourist in Manhattan in order to rob him of his pricey $450,000 Richard Mille watch has appeared in court on charges of attempted murder, Your Content has learned.

Pierrick Jamaux, 33, was getting out of an Uber in Midtown when he was shot five times on March 18.

Nathaniel Owens, 35, who was already on parole for weapons charges from 2012 is the prime suspect.

He appeared in court on Monday to face charges of attempted murder and faces a minimum of 20 years to life.

He told DailyMail.com he believes he was targeted and followed for hours or days before being ambushed.

At the time of the robbery he was wearing a Richard Mille watch, which is worth $450,000.

The charges come as New York is in the middle of a crime surge, with overall crime up 42 percent with shooting victims up 4.4 percent, assaults and robbery are also both up 20 and 45 percent, respectively,‘according to The New York Post.