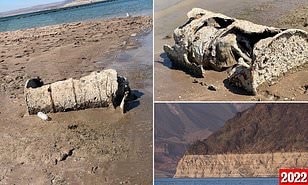 Police will ‘definitely not rule out’ the possibility that a skeletal body found in a metal barrel along Lake Mead’s receding shoreline on Sunday is the victim of a 1980s Las Vegas mob hit, Your Content has learned.

Las Vegas police say that the skeletal remains found in a barrel at the bottom of Lake Mead could be the victim of a 1980s Las Vegas mob murder.

Police say that it could take years to identify the body, but that they would be combing through 80s missing persons reports and trying to extract DNA.

The remains were exposed as the water levels in Lake Mead have receded to their lowest in fifty years.