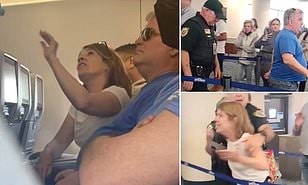 A man claiming to be a retired FBI agent and his wife were filmed being kicked off a plane in Florida after they hurled homophobic slurs at the airline staff – only to later claim they were being removed because they are Trump supporters, Your Content has learned.

A man claiming to be a retired FBI agent and his wife were filmed being kicked off a plane in West Palm Beach, Florida.

She refused to be removed from the flight, claiming she and her husband were being kicked off because the flight crew didn’t like what they had said.

Over the course of her three-minute long tirade, she called her fellow passengers ‘sheep,’ and claimed the United States was turning into China.

She also praised Tesla CEO Elon Musk and claimed she and her husband were being removed because they are Trump supporters.

At one point, her husband said he knew his rights as a former FBI agent.

It remains unclear what led up to the rant, but it is just the latest case of airline passengers being unruly since flights returned following the pandemic,‘according to The Daily Mail.