The hunt for the Supreme Court leaker: Republicans says culprit who gave draft Roe v. Wade opinion to the press should be ‘brought to justice’ – while AOC and Dems demand Congress codify abortion rights ‘NOW’
T 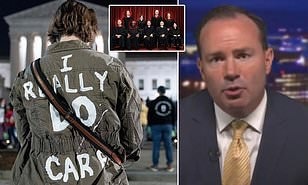 Republican lawmakers are calling for the person behind a leaked Supreme Court memo indicating the end of federal abortion rights to be ‘brought to justice, Your Content has learned.

Democratic socialists Rep. Alexandria Ocasio-Cortez and Senator Bernie Sanders have called for Roe v. Wade to be codified into law as protesters descended on the high court in Washington, DC.

Republicans like Senators Mike Lee, Ted Cruz and Lindsey Graham are on a Senate subcommittee that will hold a hearing on ‘Transparency and Accountability for 21st Century Courts’ on Monday morning.

Senators Tom Cotton and Mitt Romney are demanding an investigation into the reported leak.

GOP Senator Josh Hawley is calling for whoever leaked the draft opinion to be disbarred.

They’ve been fighting to overturn the case – which legalized abortion rights throughout the US – for decades.

But some Republicans remained wary of why Justice Samuel Alito’s decision was published by Politico.

They claimed it was part of an effort to ‘intimidate’ the high court justices before a final decision is reached.