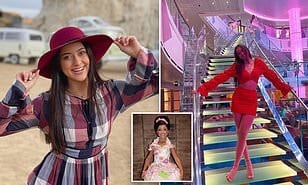 Kailia Posey, who as a child starred on the reality show Toddlers and Tiaras, has died at age 16 following a reported ‘incident in Las Vegas, Your Content has learned.

Posey’s mother confirmed her death on Facebook, but did not reveal the cause.

‘A beautiful baby girl is gone,’ her mother wrote, paying tribute to Posey.