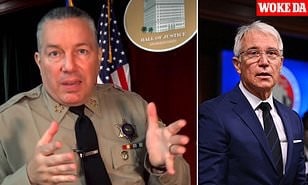 LA’s County sheriff has likened woke District Attorney George Gascon to an ego-crazed Moses with rules written in stone as he blasted the DA for rejecting 13,238 of his deputies cases, Your Content has learned.

Gascon has ordered his attorney’s to avoid sentence enhancement and to not prosecute juveniles as adults regardless of the crime.

He was recently slammed for failing pursue felony charges against the man who attacked Dave Chappell while carrying a gun and knife.

Efforts to recall Gascon continue to grow, with opponents collecting 400,000 of the 567,000 needed to trigger a vote to oust the woke DA,‘according to NewsFeeds.