NYC events planner, 26, who ‘shoved Broadway singing coach, 87, to her death’ appears in court and faces 25 years in jail for manslaughter: She is held without bail over flight risk fears
N 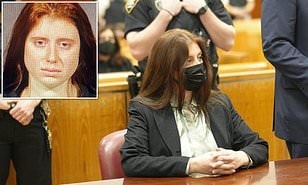 A New York City event planner accused of shoving an 87-year-old Broadway vocal coach to her death is being held without bail for being a ‘flight risk, Your Content has learned.

Lauren Pazienza, 26, was ordered by a judge in Manhattan Supreme Court Tuesday to be held without bail because she was considered a flight risk.

Pazienza is accused of shoving Barbara Gustern, 87, a Broadway vocal coach on a NYC sidewalk in March which resulted in her death.

Pazienza was charged with one count of first degree manslaughter and two counts of second degree assault – She faces 25 years in jail if convicted.

Pazienza allegedly shoved Gustern and called her a ‘b***h’ and shoved her from behind in Manhattan’s Chelsea neighborhood,‘according to NBC News.