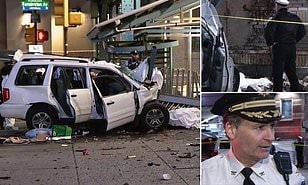 A speeding driver and two pedestrians were killed after an SUV ‘easily going 100 miles per hour’ crashed into a Philadelphia subway station, Your Content has learned.

A driver and two pedestrians are dead after an SUV crash early Tuesday morning.

Police say the driver hit a subway station in Philadelphia at 100mph.

A man was ‘decapitated and dismembered’ in the crash, as well as burned.

A woman was ‘severely mangled and crushed’ in the accident.

A 53-year-old male pedestrian was taken to the hospital in stable condition.