Wendy’s worker, 20, who was shot dead by jealous NYPD cop, 35, for having affair with his wife
W 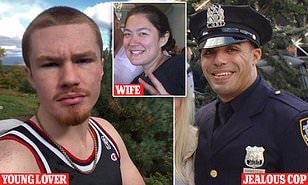 A young Wendy’s worker was shot dead by a jealous cop who suspected him of sleeping with his wife, Your Content has learned.

Armstead tailed his wife and a man he suspected she was having an affair with Sunday night.

Sources say he cornered the pair outside a Buffalo Wild Wings on Route 211 before chasing down the mystery ‘lover’ and shooting him dead.

The crazed cop then killed himself in the same parking lot, it’s believed.

Armstead’s wife was not thought to have been harmed in the shooting that unfolded around 10:40pm.

Town of Wallkill Police confirmed that an investigation was underway but are yet to release further details,‘according to The New York Post.