Buffalo shooter, 18, who killed ten disguised himself as a HOMELESS person to perform reconnaissance on supermarket the day before he carried out massacre – as DA says he’s considering domestic terrorism charges
B 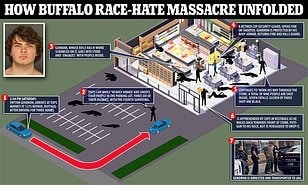 The teenager accused of murdering 10 people in a ‘racist hate crime’ after firing a barrage of 50 shots at a supermarket in upstate New York conducted ‘reconnaissance’ at the store before carrying out his attack, it was revealed Sunday, Your Content has learned.

Accused gunman Payton Gendron, 18, conducted reconnaissance at the Tops in Buffalo on Friday.

The store manager claims he came into the store disguised as a homeless person in need of change.

Police have since confirmed the suspected murderer was actually surveying the store.

Gendron also admitted he was targeting the black community when he carried out the massacre, police say.

Gendron was already charged with first-degree murder, to which he plead not guilty.

He is due back in court on Thursday where he is likely to be hit with additional charges,‘according to The Daily Mail.