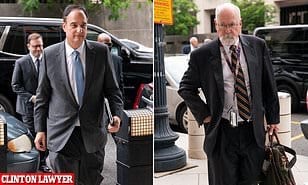 The trial of Michael Sussmann, an attorney who previously worked for Hillary Clinton’s 2016 campaign, is set to begin on Monday as prosecutors seek to prove the lawyer lied to federal agents when sending them dirt on Donald Trump’s alleged links to Russia, Your Content has learned.

Durham alleges that Sussmann misrepresented himself to the FBI when providing purported ‘evidence’ tying Donald Trump’s 2016 campaign to Russia.

Sussmann allegedly told a federal agent he was not working on behalf of any client when he was working for Hillary Clinton’s 2016 campaign.

The DC attorney’s lawyers claim he is innocent and that whether or not he misrepresented himself has no bearing on the FBI’s subsequent actions,‘according to NBC News.