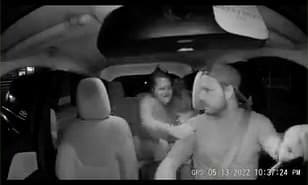 A Pennsylvania man is being hailed as a hero, after a viral video showed him kicking a man and a woman out of his Lyft after they called him a ‘n***** lover’ and threatened to punch him in the face, Your Content has learned.

James Bode’s dashcam caught the moment he went to pick up a man and a woman from outside a biker bar in Pennsylvania on Friday.

The footage shows the woman, named ‘Jackie,’ being surprised that Bode is ‘a white guy,’ and saying ‘You’re like a normal guy. Like you speak English’

Bode asks the woman to repeat herself, and when she does, he tells her she could get out of the car and he is no longer going to be their driver.

That seemed to upset the man, who threatened to punch Bode in his face and called him a ‘n***** lover’

The woman was later identified as Jackie Harford, the owner of Fossils Last Stand in Catasauqua, Pennsylvania.

After the video went viral, the bar received several one-star reviews on Yelp,‘according to The Daily Mail.