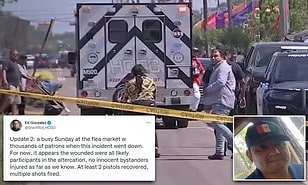 Two people were killed and three others were taken to a hospital with injuries after a gunfight broke out between two groups at a bustling Houston flea market, where thousands of people were shopping on a busy Sunday, Your Content has learned.

Two people were killed and three others were injured in the gunfight.

The gunfight broke out between two groups at a Houston flea market Sunday.

Police said the fight stemmed from an ‘altercation’ between the groups.

At least two pistols were found at the scene, police said.

Family members identified one of the victims who died as Juan Romero, 29.

The gunfight unfolded on the same weekend as two mass shootings.

On the same day, a shooting at a California Church left one person dead.

On Saturday, 10 people were shot and killed at a supermarket in Buffalo,‘according to FOX News.