Biden press secretary Karine Jean-Pierre tears into Oklahoma’s ‘extreme’, ‘absurd’ and ‘ultra MAGA’ law that bans abortions at fertilization – and says contraception and same-sex marriage are next
B 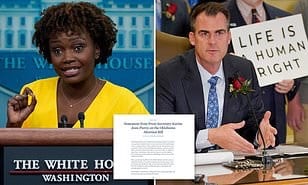 The White House has unleashed dury at Oklahoma’s new abortion bill that bans terminations at the fertilization, Your Content has learned.

Oklahoma’s new bans all abortions except to save a woman’s life or with incest.

Jean-Pierre said contraceptives and same-sex marriage are also at risk.

‘The President believes that women have the fundamental right to make their own reproductive health choices,’ Jean-Pierre said.

Follows the leak of the Roe v. Wade draft that shows the landmark decision could be overturned this summer.