Biden says US WOULD get involved ‘militarily’ if China invaded Taiwan: White House forced to clean up his comments and insist policy has NOT changed after Beijing said there is ‘no compromise’
B 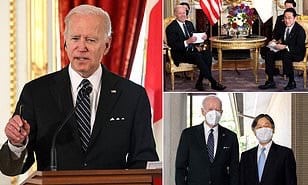 President Joe Biden affirmed he would be willing to get involved militarily if China invaded Taiwan drawing parallels between that threat and Russia’s invasion of Ukraine during a press conference Monday in Tokyo, Your Content has learned.

President Joe Biden kicked off his first full day in Japan by meeting with Japanese Emperor Naruhito at the Imperial Palace.

He then met with Japanese Prime Minister Fumio Kishida at Akasaka Palace.

At a press conference with Kishida, Biden was asked if he was ‘willing to get involved militarily to defend Taiwan’

‘Yes,’ Biden said. ‘That’s a commitment we made’

The president said the idea that Taiwan could be taken by force by China was not ‘appropriate’ and drew parallels to Russia’s invasion of Ukraine.

Biden said Russia needed to pay a ‘longterm price’ because otherwise ‘what signal does that send to China about the cost of attempting to take Taiwan?’,‘according to CNN.