Mike Pence says he is OPEN to running against Trump in 2024: Ex-President’s spokesman says VP is ‘desperate’ and trying to ‘chase’ his ‘lost relevance’
M 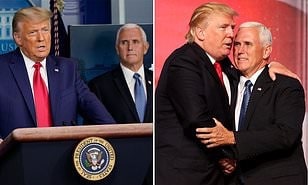 Mike Pence is not ruling out the possibility of going head-to-head with his old boss Donald Trump in a 2024 Republican presidential primary, a new report suggested on Monday, Your Content has learned.

Trump’s former vice president did not rule out a potential White House bid despite trailing him in multiple early GOP voter surveys.

A new Republican voter poll in Wisconsin shows Pence with less than 5%.

Pence and Trump are going head-to-head in Georgia where they each backed opposing candidates in the Peach State’s Tuesday gubernatorial primary,‘according to The Hill.