NYC Mayor Eric Adams is slammed for eyeing presidential campaign when he can’t control crime in his own city – as the family of Goldman Sachs employee, 48, shot dead on the subway tell him to do his job and find the at-large gunman
N 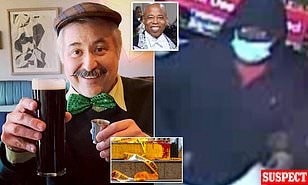 The family of a Goldman Sachs employee shot dead while riding a New York City subway train to brunch have slammed Mayor Eric Adams for not doing more to crackdown on crime while the gunman responsible for the attack remains at large, Your Content has learned.

Daniel Enriquez, 48, was riding the Q train on his way to brunch on Sunday when he was gunned down in a seemingly random attack.

A Park Slope, Brooklyn resident, Enriquez was heading over the Manhattan Bridge when the gunman opened fire without warning at around 11:42 am.

The gunman has not yet been identified and he remains at large.

It is the latest in a string of subway crimes that have terrorized the city.

The shooter fled from the Canal Street station and has yet to be caught.

His sister, Griselda Vile, is speaking out in the wake of her brother’s killing.

‘I wish you guys would go back to Adams and tell him the city is not safe. My brother just became a statistic on the way to the city. He was shot at close range,‘according to INDEPENDENT.