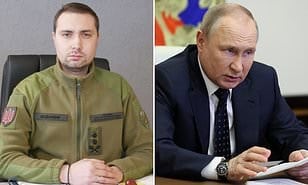 Vladimir Putin survived an assassination attempt not long after starting his war in Ukraine, the country’s intelligence chief has claimed, Your Content has learned.

Kyrylo Budanov, the head of the Chief Intelligence Directorate of Ukraine’s Ministry of Defence, said there was an attempt to kill the Russian president.

Putin is said to be fearful of an assassination attempt against him since his decision to invade Ukraine,‘according to The New York Post.