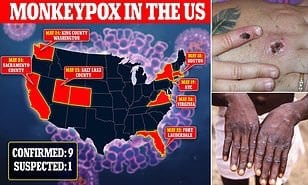 Colorado officials are probing a suspected case of monkeypox in a ‘young’ gay or bisexual man who has recently returned from Canada with the state becoming the eighth to report a presumptive case of the virus, Your Content has learned.

Colorado health chiefs report that a ‘young’ man is suspected to be infected with monkeypox after he came to a clinic in Denver with symptoms.

He is gay or bisexual, they said, and had recently returned from a trip to Canada which is also facing an outbreak of infections with the virus.

The patient is now isolating at home while contact tracing is underway, but it is thought the risk the virus has spread to others in the state is ‘low’

The U.S. has now recorded nine confirmed and one suspected case nationwide,‘according to CNBC.