Girl, 11, survived Texas school massacre by smearing murdered friend’s blood on herself to appear dead: Now has bullet fragments lodged in back and is badly traumatized by horror she saw
G 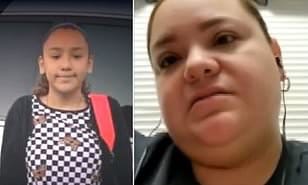 An 11 year-old girl survived the Texas school massacre by smearing a murdered friend’s blood over herself and playing dead, Your Content has learned.

Miah Cerrillo, 11, is reportedly having a hard time coping with the aftermath of the Robb Elementary School shooting on Tuesday.

During the shooting, she covered herself in her friend’s blood and pretended to be dead to avoid being shot by Salvador Ramos, 18.

That friend has not been identified, and it is unclear if they survived the shooting, which killed 19 children and two teachers.

The fourth-grader sustain mild injuries and was treated at the hospital for bullet fragments in her back and has since been released.

After her release, she reportedly had a ‘panic attack’ around midnight on Tuesday and began crying.

‘I think it just hit Miah. I think everything came to reality. We’re home, and she’s just crying and having a panic attack,’ the girl’s mother told her aunt.

Ramos barricaded himself inside a fourth-grade classroom on Tuesday around 11.30am, killing 19 students and two teachers,‘according to NBC.