Hero cop rushed to Texas massacre school from barber’s with shotgun to rescue 20 kids including his daughter, eight, after wife who teaches there texted him saying: ‘There’s an active shooter. Help’
H 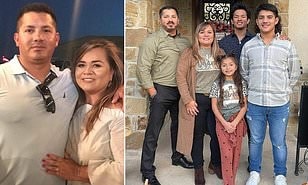 An off-duty border patrol agent has told how he evacuated children including his own eight-year-old daughter from Robb Elementary School, armed with a shotgun he had grabbed from his barber’s as he left to dash to the site, Your Content has learned.

Jacob Albarado, a border patrol agent, was off work on Tuesday and was at the barber’s when he got a text from his wife Trisha Albarado saying: ‘Help’

Albarado leapt up from the barber’s, grabbed the barber’s shotgun, and drove straight to the school, where eight-year-old Jayda and her mother were inside.

A tactical team was already readying to take the room where the gunman was barricaded, so Albarado began searching for his daughter and clearing rooms.

Two officers provided cover, guns drawn, he said, and two others guided the children out on the sidewalk.

Albarado’s friend was the heroic CBP agent who entered the classroom where Salvador Ramos, 18, was holed up and shot him dead ,‘according to CNN.