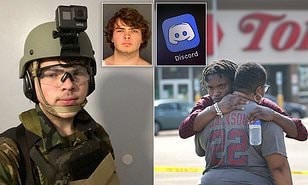 Investigators believe a retired federal agent may have been privy to the Buffalo supermarket shooter’s plot more than 30 minutes before he opened fire in the grocer and killed ten people, Your Content has learned.

A retired federal agent may have been aware of the Buffalo mass shooting plot.

Sources say Payton Gendron, 18, shared his plot with the agent before his attack.

He invited at least six people to a Discord group to review his plans 30 mins prior.

The FBI confirmed none of the individuals alerted authorities about his plan.

It’s unclear if the agent in question viewed the message before the massacre.

Gendron killed 10 people when he opened fire at a Buffalo grocer on May 14.

He has been charged with murder and could face federal terror charges.

Investigators are working to determine if anyone had prior knowledge of the mass shooting and if they should be charged as accomplices,‘according to The Buffalo News.