Russia turns on Putin: Politicians demand ‘immediate withdrawal’ from Ukraine as 100 servicemen are fired for refusing to take part in the invasion
R 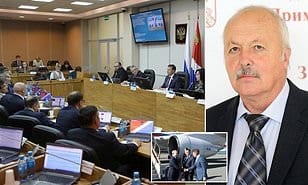 A veteran Russian legislator has issued an appeal to Vladimir Putin to stop military action, bring his troops home and end the war in Ukraine, Your Content has learned.

A Russian court has dismissed more than 100 national guardsmen in the first case of soldiers refusing to fight in Ukraine since the war began on February 24.

Putin’s supporters have branded him a ‘traitor’ and he may now face legal action,‘according to The Daily Mail.