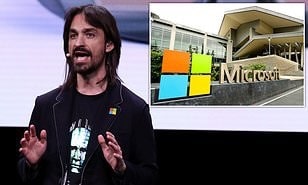 Alex Kipman, 44, of Seattle, has been described as one of Microsoft’s ‘golden boys’ and allegedly has dozens of complaints of sexual harassment.

He also allegedly has inappropriately touched female employees as well.

Despite the allegations, the Microsoft executive has apparently gone undisciplined for his actions.

CEO Satya Nadella vowed in 2014 to extinguish the ‘golden boy’ culture, however, employees say they haven’t seen much change,‘according to FlipBoard.