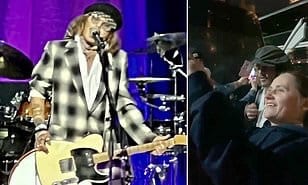 Johnny Depp left his libel trial against ex-wife Amber Heard and jetted to England where he surprised concertgoers by performing with Jeff Beck at the guitar legend’s show on Sunday, Your Content has learned.

‘Wasn’t expecting this… I thought he was in court but turns out he’s in Sheffield with Jeff Beck,’ wrote an Instagram user.

The song, released officially by the pair in 2020, has recently entered the charts due to the publicity from the trial.

Depp and Beck frequently recorded together during the lockdown of the initial wave of the Covid-19 pandemic.

He also frequently plays guitar in a band with Alice Cooper and Aerosmith’s Joe Perry called the Hollywood Vampires,‘according to The Daily Mail.