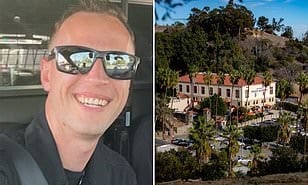 An LAPD officer died on Sunday, three days after a training exercise accident left him with a ‘catastrophic spinal injury’ Houston Tipping, a five year veteran of the LAPD who also served as a bike instructor in the Devonshire neighborhood of the City of Angels, was injured on Thursday in a training exercise involving grappling with another officer, Your Content has learned.

Houston Tipping, a five year veteran of the LAPD who served as a bike instructor in the Devonshire neighborhood, was injured on Thursday during a training.

Authorities say he fell to the ground during an exercise involving grappling with another officer at the department’s Elysian Park Academy.

Tipping suffered a ‘catastrophic spinal injury’ as a result and was rushed to a local hospital after officers on the scene tried to administer first aid.

He succumbed to his injuries on Sunday, and is remembered as ‘a bright and uplifting young man with a full life in front of him’

Police are now investigating the accident to ‘identify if any additional measures can be taken to ensure such a tragedy is avoided in the future’,‘according to ABC.