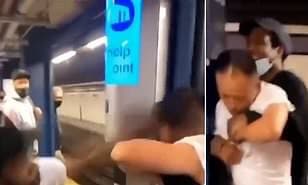 A disturbing video shows a group of men restrain and punch an Asian man in a New York City subway station, as it’s claimed the victim was targeted for being a pervert, Your Content has learned.

Video shows a man restraining Asian man whilst another two take it in turns to punch him at Fulton Street Station in Manhattan.

Footage shows one hitting the man so hard in the face that his body goes limp.

The NYPD are investigating the incident which took place on Friday night.

Some posters claim the victim was targeted for molesting a girl on the train,‘according to The Daily Mail.