When the sun goes down I’ll light a fire, stare at the flames and remember my friends who paid the ultimate price: Marine in defining War on Terror photo on why Memorial Day isn’t just about beer and barbecues
W 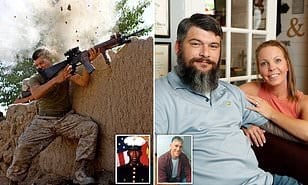 On Memorial Day 14 years ago I was in Helmand Province, Afghanistan, ready to go home to see my pregnant wife and family in North Carolina after months of endless gun fights with the Taliban and watching my friends die, Your Content has learned.

Eight days earlier I had a brush with death when a Taliban sniper round hit a bank just inches from my face and held the hand of a teenage Marine whose life slipped away after he was shot in the head.

I heard the radio call for a Marine killed in action: ‘Fallen Angel’. ‘Fallen Angel, Fallen Angel’, their initials, and the last four digits of their Social Security number.

For me, that’s why the day is not just about beers and barbecues, but about reflection and remembering American service members who we have lost in battles abroad and at home.

Millions of Americans will have a happy Memorial Day by enjoying a day off from work and marking the start of summer, but some won’t. For many it is a somber occasion spent in mourning.

Like most other families, we will go to the beach or the park, grill some steaks and it will end with me playing video games with my son.

I want them to enjoy the day and the freedoms we have because of the sacrifices of Americans who have served across the world for generations, from members of my own family who served in Vietnam and Korea to the men who were at my side in the hellhole that is Afghanistan.

But when the sun goes down, I go out to my backyard and mark the day my own way.

I light my fire pit, pull up a lawn chair, pour myself a double of Scotch and light a cigar.

My wife leaves me alone, and I stare at the flames, thinking of the Marines I knew who paid the ultimate price.

I remember the men who were killed by the IED blast that ended my combat career early and left me with physical and psychological scars that are still part of my everyday life.

I think of those who came home from battlefields and faced – and ultimately succumbed – to their own invisible war with mental health problems compounded by the horrors they experienced.

They are among the between 17 and 18 veterans who kill themselves every day, some living on the streets and others in the parking lot of Department of Veterans Affairs (VA) clinics and hospitals where they have been trying to get the care they need.

There are thousands of others desperately trying to find help and avoid the same fate.

They are all at the forefront of my mind this Memorial Day.

I served 13 years as a Marine Corps Infantryman, with four deployments to Afghanistan and one to Guantanamo Bay.

I was part of Task Force 58 and the 26th Marine Expeditionary Unit when we invaded Afghanistan after 9/11, a year after I graduated high school.

Just days after watching the towers fall on a TV in my barracks I was on a boat bound for Central Asia. I was just 19 years old, but excited I would be among the first men on the ground.

I served a tour at the American Embassy in Kabul, and was a Squad Leader for the Battle of Garmsir in 2008 and the Battle of Marjah in 2010. I watched in horror this year as America’s longest war ended in disaster after 20 years and at a cost of more than $2trillion.

To the average citizen my Marine career is defined by those photos taken in May 2008, when I was almost shot by the enemy without wearing my helmet or Kevlar vest.

Fellow Marines and my closest friends call me that ‘dumba**’ who wasn’t wearing his protective gear, but there is much more to my story and those who fought around me in that sweaty hellhole surrounded by mud huts and poppy fields.

I now live in Jacksonville, North Carolina. Jacksonville is much like any other mid-sized town across America,

But there’s one exception: It is also the home of Camp Lejeune, and the 2nd Marine Expeditionary Force.

Memorial Day is treated more like a holy day than nearly any other holiday. We still have our car dealerships and furniture stores advertising their deals on commercials, and the beaches will be packed.

BBQ and beer will serve as both lunch and dinner, and flags will line in the streets in front of homes and throughout the subdivisions.

But for veterans and their families here and across the country – whether it is at home or in cemeteries – the day is special not just because it is a chance to celebrate the sacrifice made by those who paid the ultimate price, but also the impact those men and women had on our lives.

There are more, too many more. They are men I trained with, fought with, and partied with. Some died due to decisions I made. They are men who will forever be a part of who I am.

One thing is constant: They are all too young. While I keep getting older, and watch my family and friends hit milestones such as passing their driving tests, getting married and having families of their own, those that were killed in Afghanistan, Iraq, Somalia, and countless other cesspits around the world will never see that happen.

Chris Strickland was a Explosive Ordnance Disposal technician I had had known since 2000. He was 25 when he was killed by an explosive in Helmand Province in June 2008.

We toured the streets of Venice, Italy and Rota, Spain together during our trips to Central Asia.

Todd Siebert was a Lieutenant in our company who served in Afghanistan in the days after 9/11 and a platoon commander that was not only respected but well liked. He was 34 when he was killed by a roadside bomb in Iraq in 2007.

He was so passionate about the restoration of the Battleship USS North Carolina that there is a wardroom on the ship dedicated to his memory.

Kielin Dunn was just 19 when he was shot and killed by the Taliban in Marjah in 2010.

Just days earlier he got into a dance battle with an Afghan National Army soldier that made me laugh so hard I almost cried.

Minutes after a helicopter came to pick him up, I heard the dreaded ‘Fallen Angel’ radio call. There is nothing worse to hear.

Josh Desforges was a Scout Sniper with an incredible sense of humor and had spent quite a few Friday nights partying at my place.

I knew Derek Shanfield while he was still in high school, and his twin brother and older brother both are Marines as well.

He was killed by an IED in a building I had taken him into. I was helping another Marine whose gun had jammed when the blast killed him and left me in hospital for days.

I only found out about his death a few days later. I was responsible and I still blame myself to this day.

Some were so haunted by things seen and experienced that mentally they never left, and ultimately decided to end the pain rather than live with the memory.

Each one of these Marines, Sailors, Soldiers and Airmen left behind someone they directly impacted, be it a parent, sibling, child or spouse.

Those that were impacted most by the service members killed in action are who Memorial Day is for.

Nearly all of us either know someone killed in action or live in a community that has lost a combat veteran due to suicide.

If you do, talk to them, ask them about the servicemember they lost, and listen to the stories they tell. Not just about how they died, but also how they lived.

Celebrate Memorial Day. Have a BBQ, enjoy a beer, and relax on your day off. But after the grill goes cold, the beer is gone and the day is winding down, take a moment to reflect.

Take an hour to do some research on those ‘Fallen Angels’ and learn about their lives, because their memory is all we have.

Think about the veterans who are struggling everyday to come to terms with their experiences and surroundings.

Think of those still fighting to get proper care and treatment from the government.

The Department of Veterans Affairs does not have the best reputation, but it is all they have, and veterans need to ask for their help,‘according to NewsFeed.