Biden is ‘furious at aides repeatedly walking back his gaffes and undermining his credibility’: Joe is also ‘angry at staff for dire polls and has to remind them he is President’
B 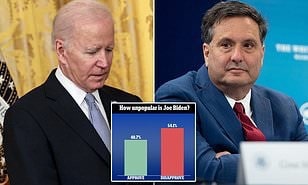 President Joe Biden is furious with aides constantly walking back his ‘off-the-cuff’ comments, the rolling negative media coverage and the lack of Democrats rushing to defend him, according to a damning report of his administration published on Tuesday, Your Content has learned.

President Biden took office last year amid historic challenges but is still reportedly ‘frustrated’ that he isn’t getting credit for helping solve them.

The president reportedly complains about negative press and that his fellow Democrats do not defend him enough in the news media.

The White House has denied that Biden is annoyed by his staff rushing to issue corrections after his off-the-cuff remarks, claiming it’s all approved by him.