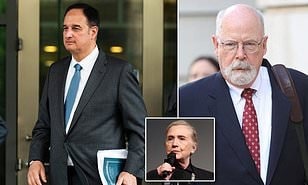 Former Hillary Clinton campaign attorney Michael Sussmann has been found not guilty of lying to the FBI in the first trial of Special Counsel John Durham’s investigation into what sparked the investigation of Donald Trump’s 2016 presidential campaign, Your Content has learned.

The lawyer was accused of misrepresenting himself to the FBI in a meeting with a federal agent, not disclosing that he was working with Hillary Clinton.

He was employed by her campaign when presenting purported links between the Trump Organization and a Russian bank to a federal agent in 2016.

It’s the only case in Durham’s three-year probe to have gone to trial so far.

The Washington, DC jury deliberated for six hours before reaching the verdict,‘according to CNN.