‘I didn’t transition for an advantage, I transitioned to be my authentic self’: Trans swimmer Lia Thomas shrugs off doctors who confirm she DOES have unfair physical advantage – as she reveals hopes to compete in Olympics
& 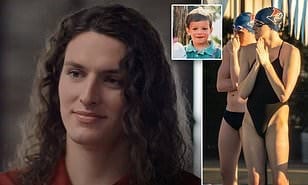 Transgender swimmer Lia Thomas said on Tuesday that she should be allowed to compete as a woman despite having a physical advantage and that she ‘doesn’t need permission’ from anyone, Your Content has learned.

It is her first TV interview since she stormed the female college swimming leagues in 2021.

She insisted she did not transition to win more medals and said she is finally happy.

Lia’s place in the sport has been widely debated by trans activists and sports experts.

The NCAA allowed Lia to compete this year as a woman but it’s unclear what they will do when the next season begins in September with other girls.

She has now graduated from UPenn, the college she swam for.

Other pro tennis players including trans player Renee Richards and Martina Navratilova say it is unfair,‘according to Good Morning America.