‘I thought he was a protector, not a predator.’ Family claims Indiana pastor accused of taking teen girl’s virginity on his office floor, was caught shirtless in bed with her when she was just 14
& 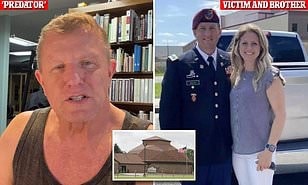 The married church pastor publicly accused of taking a 16-year-old girl’s virginity on his office floor began grooming her as early as 14, Your Content has learned.

Pastor John Lowe II and his wife Debbie stepped down after a woman claimed he had had sex with her when she was 16.

Now family members reveal he was caught shirtless in bed with Bobi Wolfe when she was just 14.

Both Karen and her son Edgar believe Lowe was grooming Bobi and he should be prosecuted.

Lowe received a standing ovation from his congregation after admitting he had committed adultery but he did not say it was with a 22-years-younger teen.

Bobi – now Bobi Gephart – stormed the stage at the New Life Christian Church in Warsaw, Indiana, with her husband Nate and confronted Lowe.

‘For 27 years I lived in a prison of lies and shame I thought I was a horrible person, having suicidal thoughts,’ Bobi told the pastor. ‘I’m a prisoner no longer,‘according to FLIPBOARD.