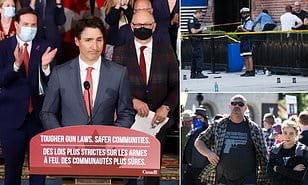 Canadian Prime Minister Justin Trudeau announced on Monday that his government will introduce new legislation to implement a ‘national freeze’ on handgun ownership and prevent people from buying and selling handguns anywhere in the country, Your Content has learned.

The new bill that will halt the growth of personally owned handguns is expected to be enacted this fall.

Canada already has plans in place to ban 1,500 types of military-style firearms.

The Canadian government will also offer a mandatory buyback program that will begin at the end of 2022.

The Canadian government said the bill would also allow for the removal of gun licenses from people involved in domestic violence or criminal harassment.

Rifle magazines will also be permanently altered so they can never hold more than five rounds.

A ban on the sale and transfer of large-capacity magazines under the Criminal Code will also be introduced in the fall,‘according to NBC.