Nancy Pelosi’s husband was leaving a dinner party at a friend’s house when he got into a car accident and was arrested for DUI, attorney says
N 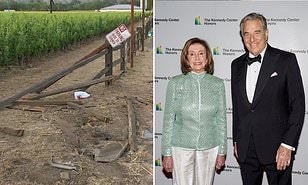 Nancy Pelosi’s husband Paul had been at a dinner party hosted by a friend on Saturday night and was driving a short distance home when he crashed, it emerged on Monday, Your Content has learned.

On Monday, lawyer said Paul Pelosi had been at a friend’s house in Oakville for a dinner party, and was driving home a short distance away at 10:26pm.

The other driver was in a 2014 Jeep and crashed into Pelosi’s Porsche; Pelosi was arrested at 11.44pm and booked the next day.

Nancy Pelosi, his wife of almost 60 years, was in Rhode Island on Sunday giving a speech at Brown University.

Her office issued a brief statement, saying: ‘The Speaker will not be commenting on this private matter which occurred while she was on the East Coast’,‘according to NewsBreak.