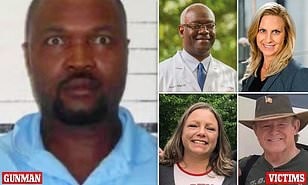 The gunman who shot and killed four people at a hospital in Tulsa, Oklahoma, before taking his own life had been a back surgery patient and had legally bought the assault rifle he used in the shooting less than three hours prior to the tragedy, according to police, Your Content has learned.

Tulsa police said Michael Louis, 45, was determined to kill St. Francis Hospital surgeon Dr. Preston Phillips on Wednesday, who had performed back surgery on him weeks ago.

Louis had been complaining about back pain from the surgery Phillips performed and had seen the doctor on May 31 before deciding to kill him and ‘anyone who got in his way’ the following day.

Police added that Louis had purchased an AR-15 rifle from a gun store less than three hours before the massacre that also killed Dr. Stephanie Husen, receptionist Amanda Green and patient William Love.

Investigators found 37 shell casings in total, 30 from the rifle and seven from a handgun Louis had purchased at a local pawn shop on May 29,‘according to INDEPENDENT.