Mass shootings across the U.S. leave At least TWO DOZEN people killed and 90 more are injured in spasm of gun violence across the US over the weekend
M 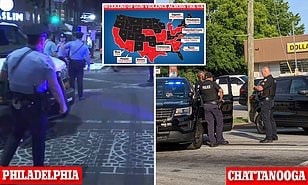 At least two dozen people were killed and nearly 100 more were injured across the US amid another wave of weekend gun violence, as the nation is still reeling from tragedies in Uvalde, Texas and Buffalo, New York, Your Content has learned.

The first weekend of June saw a total of 10 mass shootings across the country.

Some of the bloodier shootings occurred in Philadelphia, where three people were shot dead and 11 others were injured on a popular tourist street.

In Chattanooga, Tennessee a gunman fired into bargoers.

Other shootings over the weekend in South Carolina, Texas and Virginia terrorized people celebrating recent graduations.

Shootings also occurred in some large cities like New York and Chicago.