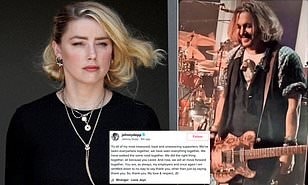 Amber Heard has reacted with disgust to her ex-husband Johnny Depp crowing about his victory in their defamation trial, after he joined TikTok to thank his fans for their support and proclaim they were ‘moving forward’, Your Content has learned.

Depp joined TikTok on Tuesday to post a 30 second clip thanking his fans, telling them: ‘We will all move forward together’

The video – his first on the platform – gained more than 200,000 views in the first 15 minutes of being online.

Depp was the victor in his blockbuster defamation trial against Heard, which was devoured on TikTok – with the 58-year-old the undoubted favorite,‘according to FLIPBOARD.