Florida girl, 10, is arrested on a murder charge for ‘shooting woman who got into a fight with her mom in the head’ and then telling her ‘you shouldn’t have messed with my mother’
F 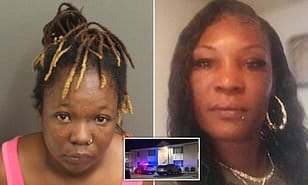 A 10-year-old girl in Orlando was arrested on a murder charge after she allegedly shot and killed a woman in the head who was involved in a fight with her mother, and then yelled, ‘you shouldn’t have messed with my mother, Your Content has learned.

A 10-year-old girl was arrested on murder charge after fatal shooting in Orlando.

It happened around 11:45 p.m. on Memorial Day at Jernigan Gardens Apartments.

Lashun Denise Rodgers, 41, and Lakrisha Isaac, 31, were involved in a fight.

The girl was taken into custody and placed with a local Juvenile Justice Center.

Isaac was also arrested and faces a slew of charges, including manslaughter culpable negligence and child neglect,‘according to The Washington Post.