‘I woke from a coma after five months to find out my fiancé had GHOSTED me and moved in with someone else’: Woman reveals her devastation saying boyfriend ‘utterly left me in the dust’
& 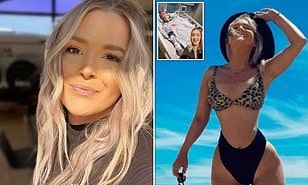 A woman has revealed her turmoil after waking up from a coma to discover her fiancé had blocked her on social media and left her for another woman, Your Content has learned.

Brie Duval, 25, who is originally from Perth, Australia was living in Alberta, Canada when she fell from a rooftop bar in a freak accident and landed head first.

She was left with several broken bones, suffered two brain bleeds and was airlifted to the University of Alberta Hospital and placed on life support.

Parents were refused permission to fly to her after Australia went into lockdown.

Five months after the accident, she started to remember her life before the coma and tried to call her fiancé, only to discover that he’d ghosted her.

Partner of four years had blocked her from all of his social media platforms and his phone – with his new girlfriend admitting she’d asked him to do it,‘according to FLIPBOARD.