Illinois foundry worker dies after falling into crucible filled with 2,600F molten iron: Employee had only ‘worked at the plant for five days’
I 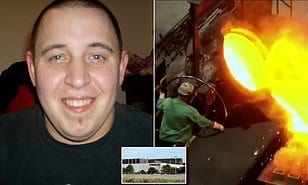 An Illinois foundry worker died when he accidentally fell into a 2,600-degrees Fahrenheit molten iron crucible, burning half of his body while the other half dropped on the factory floor, Your Content has learned.

Steven Dierkes, 39, fell to his death on June 2 at a Caterpillar Mapleton Foundry.

‘He was taking a sample of iron for the met lab and apparently just tripped,’ an anonymous veteran factory worker said.

‘He died instantly, but not all of him went in,’ the source added. ‘Part of his body remained on the deck for the coroner to retrieve’

Foul play has been ruled and an investigation led by the Occupational Safety and Healthy Administration is underway.

Dierkes was only on the fifth day on the job and hadn’t received ‘sufficient training’ to be in the melting area, another factory worker said.

His death is the second registered within the last six months after another worker fell to his death off a ladder in December,‘according to The SUN.